The only operation left to cover is creating a new post. In this section, we’ll build a new page designed specifically for that purpose.

Here’s the plan: we’ll add a link that says Create new post below the Refresh posts button on the ListPosts page. When that link is clicked, we’ll take the user to a new page which will contain a form for creating a new post. Modify the view function in ListPosts.elm as shown below.

Run json-server and elm-live from the beginning-elm directory in separate terminal windows if they aren’t running already.

Now go to http://localhost:8000 and you should see the link for creating a new post. 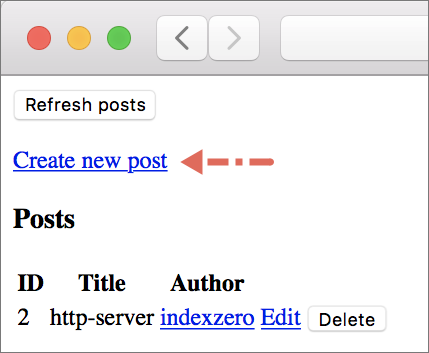 Steps 1 through 7 shown in the diagram above are already in place. Let’s implement step 8 by adding a new data constructor called NewPost to the Route type in Route.elm.

NewPost page’s path is quite simple as shown in the figure below.

Let’s add a parser to matchRoute in Route.elm for matching the new post path.

The table below shows which parser in matchRoute is responsible for matching which path in a given URL.

Step 10: Identify NewPost as the Next Page

Step 9 from the sequence diagram above tells us to store NewPost in the route field in main model. We’ve already done that in the Main.update function.

And step 10 tells us to identify NewPost as the next page. We haven’t done that yet. Let’s add a new branch to initCurrentPage in Main.elm for the NewPost route.

Now add NewPage to the Page type in Main.elm.

To fully implement step 10 we also need to create the NewPost page module. Create a new file called NewPost.elm inside the Page directory and add the following code to it. 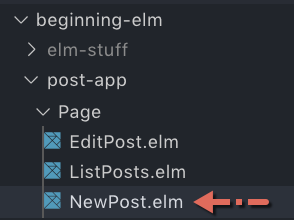 Like EditPost, the NewPost page module’s central type is also Model which is an empty record right now. We’ll expand it as we keep building the page.

The branch for the NewPost route in Main.update shows that the function for initializing the NewPost page takes a navigation key as the only input.

Let’s implement that function by adding the following code to the bottom of NewPost.elm.

We need access to navKey in NewPost to navigate users to the ListPosts page after a new post has been created. Let’s add that field to the model in NewPost.elm.

Key is defined in the Browser.Navigation module, so we need to import it in NewPost.elm.

We’re now ready to build a form through which the user will create a new post. Add the following code to the bottom of NewPost.elm.

We need to import the following modules in NewPost.elm.

The input elements in newPostForm send separate messages to the Elm runtime whenever their content is modified. Let’s add those messages to a new type called Msg. The following code goes to the bottom of NewPost.elm.

Now add update to the bottom of NewPost.elm for handling those messages.

All three branches use the post field to store information. We haven’t added that field to the Model record in NewPost.elm yet. Let’s do that next.

For comparison, the post field in EditPost.elm had WebData as its type.

The EditPost module needed to retrieve the post we wanted to edit from a server when the page was loading. By using WebData, we were able to track all states our fetch request went through.

Add the following code to the bottom of Post.elm.

We’re using -1 as an empty post’s id to indicate that it’s temporary. The real id will be assigned later when the server actually creates a post. It’s highly unlikely that a real post will have a negative number as its id. Most servers start with a positive number as an id and keep incrementing it whenever a new resource is created. We need to expose emptyPost in Post.elm and NewPost.elm.

Elm prohibits the use of dot syntax when updating a record field. That’s why we couldn’t use model.post inside updateTitle when handling the StoreTitle message like this:

To create a new post, the user has to click the Submit button. When that happens, the CreatePost message is sent to the Elm runtime.

Let’s add that message to the Msg type in NewPost.elm.

Now add a new branch to update in NewPost.elm for handling the CreatePost message.

The CreatePost -> branch asks the createPost function to build an HTTP request. Let’s implement that right below update in NewPost.elm.

We need to import the Http module in NewPost.elm.

Luckily, Elm does provide a function called Http.post for creating an HTTP POST request which is used for creating a new resource on the server. The name of this request has nothing to do with the name we picked for our resource — post. It’s just a coincidence. Here’s what Http.post’s type signature looks like:

For comparison, here’s what the type signature of Http.get we covered in the Fetching Data from an HTTP Server section looks like:

The only difference is Http.post takes a body whereas Http.get doesn’t. Just like the PATCH request we created for saving a post, the POST request also uses the Http.jsonBody function to make it clear that the body of our request is in JSON format.

The PATCH request used the postEncoder function to encode Elm values to JSON. Here’s how it looks:

createPost can’t use that encoder because our new post doesn’t have a real id yet. The server is responsible for creating that. The JSON body that eventually gets sent to the server for creating a new post will look something like this:

Notice the id field is missing. Whereas the JSON for updating an existing post looks something like this:

postEncoder includes id. That’s why we can’t use it in createPost. What we need is a separate encoder called newPostEncoder that only includes title, authorName, and authorUrl. Let’s add that below postEncoder in Post.elm.

When the POST request is complete, the Elm runtime will send the PostCreated message to update. Let’s add it to the Msg type in NewPost.elm.

If the request is successful, we need to assign the newly created post to the post field. But if the request fails, we need to save an error message in the createError field. Let’s add that field to Model in NewPost.elm.

And import the Route and Error modules in NewPost.elm.

Next we need to display the error message. Add the following code below the newPostForm function in NewPost.elm.

Taking Users Back to the ListPosts Page

It makes sense to take the users back to the ListPosts page after a new post is created. To do that, we need to return a command from the PostCreated (Ok post) -> branch using Route.pushUrl. Modify that branch in NewPost.update as shown below.

We already implemented Route.pushUrl in the Creating Edit Post Page section, but we haven’t added a branch for the NewPost route in routeToString yet. Let’s do that in Route.elm.

Now that we’re done implementing the NewPost page, we need to import it in Main.elm.

Currently, the NewPost module exposes only Model. We need to expose Msg, init, update, and view too. Let’s do that.

And handle that message by adding a new branch to update in Main.elm.

The branch for handling NewPageMsg looks very similar to the one that handles ListPageMsg which is already covered in the Updating Page Models section. This marks the completion of step 10 from the sequence diagram above. Step 11 and 12 are also in place already.

We can take care of the rest of the steps by adding a new branch for NewPage to the currentView function in Main.elm.

If you don’t remember how Html.map works, you may want to review the Displaying Current Page section.

We’re now ready to test the NewPost page. Run json-server and elm-live from the beginning-elm directory in separate terminal windows if they aren’t running already.

Check the elm-live window in terminal to make sure everything compiled successfully. Now go to http://localhost:8000 and you should see the Create new post link.

Click that link and you’ll be taken to the NewPost page. The URL in browser’s address bar will also change to http://localhost:8000/posts/new. Enter the following info into the text fields and click Submit. 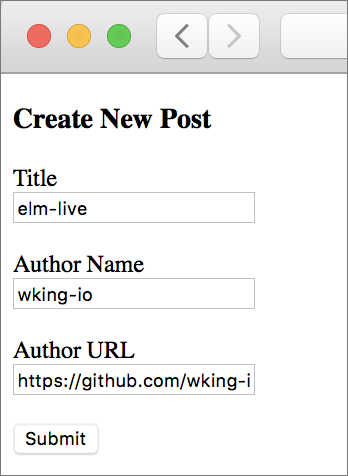 If everything goes well, json-server will create a new post and you’ll be taken back to the ListPosts page. 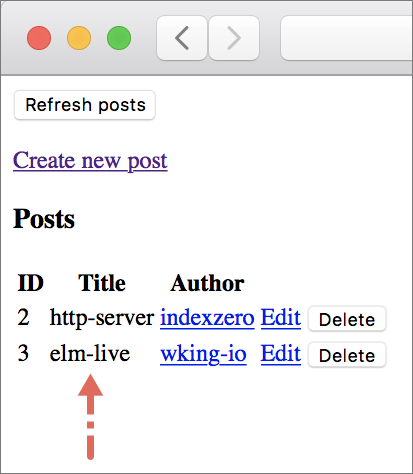 json-server incremented the id by 1 to 3 and assigned it to the new post. Originally, we had two posts. We then deleted the first post in the Deleting a Post section. It’s uncommon for the server to reuse a deleted resource’s id. You can also verify the creation of a new post by checking the server/db.json file.

In this section, we learned how to create a new resource by sending a POST HTTP request to the server. The process for creating a new resource is very similar to how we update an existing resource. One major difference is we can’t include the id of a new resource in JSON body.