In this section, we’ll learn how a subscription works. Subscription is the last piece of the Elm Architecture puzzle. It’ll also come handy for receiving data from JavaScript in the next section.

Subscriptions allow us to listen to external events such as incoming WebSocket messages, clock tick events, mouse/keyboard events, geolocation changes, and an output generated by a JavaScript library.

When we want to listen to an event all we have to do is create a subscription that specifies the type of event and which message to send to the update function when that event is triggered. We then hand that subscription over to the Elm runtime and wait for the event to occur. The runtime figures out how to listen to that event. All we need to do is handle the message it sends to our app. Let’s see how this works in practice through a simple example app that increments a counter every time a key is pressed.

As usual we’ll start with the model. Create a new file called EventListener.elm in the beginning-elm/src directory and add the code below to it. 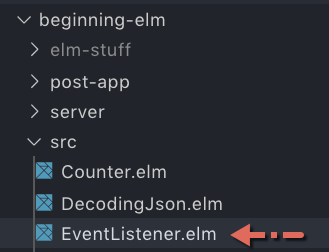 Our model is just an alias for the Int type. All we need to do is keep track of the number of key press events. Next, we need to create an initial model. Add the following code to the bottom of EventListener.elm.

The code for presenting our model to the user is also quite simple. Add the following code to the bottom of EventListener.elm.

All we’re doing here is display the model. Import the Html module in EventListener.elm.

Whenever a key is pressed an event is generated. We want the Elm runtime to notify us about that event by sending the KeyPressed message. Let’s add its definition to the bottom of EventListener.elm.

We aren’t interested in knowing which key was pressed. That’s why KeyPressed doesn’t have a payload. Later we’ll learn how to listen to a specific key press event.

Next we’ll handle the KeyPressed message in update. Add the following code to the bottom of EventListener.elm.

When the KeyPressed message arrives, we simply increment the model by 1.

Now we need to tell the Elm runtime to listen to a key press event. We can do that by creating a subscription. Add the following code to the bottom of EventListener.elm.

The Browser.Events module provides a function called onKeyPress which is responsible for subscribing to all key press events. Here’s what its type signature looks like:

It takes a decoder as an input and returns a subscription. In the Decoding JSON - Part 1 & Part 2 sections, we used decoders to transform JSON values to Elm. onKeyPress uses the same decoders to translate underlying key codes to Elm values.

How do we let onKeyPress know that we don’t care about a specific key value? We can do that by using Decode.succeed which ignores its input and always returns the given Elm value. In the subscriptions function above, we asked it to always return the KeyPressed message.

Note: If you’re interested in seeing more examples of Decode.succeed, you may want to review the Decoding a JSON Object section from chapter 6.

Notice how the subscriptions function takes a model as its only argument, but doesn’t use that argument in the function body at all. Why did we include an unused argument in the definition? That’s because Elm runtime expects the function responsible for creating a subscription to accept a model regardless of whether that model is used or not. Since we aren’t using that parameter, we should replace it with _.

Our example app is quite simple and doesn’t use the model to create a subscription. But other apps may use it to build complex subscriptions.

We’re now ready to wire everything together. Add the main function to the bottom of EventListener.elm.

And import the Browser module.

By assigning the name of the function that creates a subscription to the subscriptions field in main, we’re asking Elm runtime to start listening to the key press events as soon as the app is initialized.

We’re now ready to test. Run elm reactor from the beginning-elm directory in terminal and go to this URL in your browser: http://localhost:8000/src/EventListener.elm. You should see a page that just displays 0. 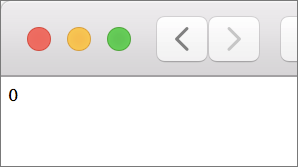 That being said, it’s cleaner to extract the code for creating a subscription out to a separate function, especially when we want to subscribe to multiple events.

Subscribing to a Specific Key Event

CharacterKey represents all character keys, for example i, d, 1, +, etc. And ControlKey represents special keys such as Control, Left Arrow, and Right Arrow. Next we’ll write a decoder that’s capable of making this distinction. Add the following code below the subscriptions function in EventListener.elm.

In the Decoding a JSON Object section, we learned how to decode an individual JSON field using the field decoder. When a key is pressed, the browser sends onKeyPress a JSON that looks something like this:

The Decode.field "key" Decode.string expression in keyDecoder pulls keyValue out of JSON. After that Decode.map uses the toKey function to determine whether the user pressed a character or a control key.

The String.uncons function splits a non-empty string into its head and tail. Here’s what its type signature looks like:

Let’s fire up elm repl from the beginning-elm directory and experiment with uncons to understand it better.

As you can see, uncons must return a value of type Maybe because the given string can be empty. We saw a similar pattern with the List.head function.

By splitting a string into its head and tail, uncons has given us the ability to pattern match on strings exactly as we would on lists. In the Pattern Matching Lists section, we saw how the List module uses pattern matching to elegantly implement the foldl function.

We can implement foldl for strings too using a similar pattern with the help of uncons.

The inner workings of List.foldl has already been covered extensively in the Pattern Matching Lists section. See if you can use that as a reference to figure out how the above implementation for String.foldl works.

Let’s handle the CharacterKey message in update by replacing its current implementing with the following.

The only thing remaining is to use keyDecoder in the subscriptions function.

Let’s extend our app by also listening to a mouse click event. When that event arrives we’ll increment the counter by 5. The first thing we need to do is add a new message called MouseClick to the Msg type in EventListener.elm.

Next we’ll handle MouseClick by adding a new branch to the update function.

When the MouseClick message arrives, we simply increment the model by 5. It’s important to add the MouseClick -> branch above the catch-all branch. Otherwise, it’ll be unreachable. Now let’s create a subscription by using the onClick function.

onClick is also defined in the Browser.Events module. Let’s expose it in EventListener.elm.

When we have more than one subscription, we must batch them with Sub.batch. Here’s how its type signature looks:

It’s interesting to note that the return type of our subscriptions function didn’t change at all even though we’re now returning multiple subscriptions. We also saw this pattern with Cmd.batch in the Navigating to List Posts Page section earlier.

Refresh the page at http://localhost:8000/src/EventListener.elm and the counter should be incremented by 5 when you click anywhere on the page.

In this section, we learned how to use subscriptions to listen to various events. Subscriptions also cause side effects. That’s why we have to let the Elm runtime manage them. Here is how the Elm Architecture looks with the introduction of subscriptions:

The following sequence diagram shows the interaction between the Elm runtime and our code.

Here’s the entire code from EventListener.elm for your reference: