Let’s create a new directory called post-app inside beginning-elm instead of cluttering the src directory with too many modules.

We need to add post-app to the source-directories list in elm.json.

Let’s move the Post type and the code for decoding it from DecodingJson.elm to a new module. Create a new file called Post.elm inside the post-app directory and add the code below to it. 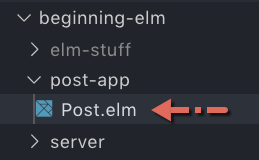 Currently, the id field in Post is an integer. We could mistakenly pass an identifier of a different data structure, which also happens to be an integer, to a function expecting a post id. The Elm compiler won’t be able to catch a bug like that. We can help the compiler by implementing identifiers as custom types. Add the following code below the Post type alias in Post.elm.

PostId is an opaque type. Let’s expose it in the module definition.

Change the id field’s type in Post from Int to PostId.

Now that id is a custom type, simply using the int decoder in postDecoder won’t be enough. We need to create a custom decoder. Add the following code to the bottom of Post.elm.

We used the Decode.map function to convert an integer to PostId. Here is what its type signature looks like:

The viewPost function in DecodingJson.elm uses String.fromInt to convert an id to a string.

Now that the id field holds a value of a custom type that’s not going to work. We need to define a custom function for that. Add the following code to the bottom of Post.elm.

Note: Although we’re moving away from DecodingJson.elm, we’ll still be using the viewPost function in a module responsible for fetching and displaying posts in the next section.

idToString uses pattern matching to expose the underlying integer value inside the PostId data constructor. Without this ability, we’d be forced to use a case expression which is not as elegant.

Finally we need to expose idToString in the module definition.

In the next section, we’ll create a separate page for fetching and listing all posts in our database.