Sometimes we need to fetch data from a server when an app is being initialized. In this section, we will learn how to do just that. So far in this chapter, we have been returning Cmd.none from init to indicate we don’t want to run any commands during initialization.

Let’s change that. We will be iterating on the same app we built in the last few sections. The good news is we have already extracted the logic for creating a command out to httpCommand in DecodingJson.elm.

All that is left to do is replace Cmd.none with httpCommand in init.

Run json-server from the beginning-elm directory in terminal using the following command if it’s not running already.

Now run elm reactor from the beginning-elm directory in a different terminal window and go to this URL in your browser: http://localhost:8000/src/DecodingJson.elm. Don’t click the Get data from server button yet. Just wait for a second and you should see the posts. 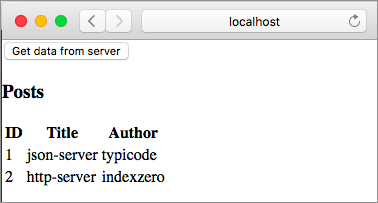 By passing a command to init, we’re telling the Elm runtime to fetch posts when the app is being initialized. But we broke something along the way. The text Loading... has disappeared again. That’s because we’re initializing the posts field in our model with NotAsked instead of Loading. Let’s fix that.

Refresh the page at http://localhost:8000/src/DecodingJson.elm one more time and the loading text should be back.

Let’s rename the button title to Refresh posts to reflect its new purpose.

While we are at it, let’s also rename httpCommand to fetchPosts.

Don’t forget to replace httpCommand with fetchPosts in init and update. We should also rename the messages.

In this section, we learned how to run a command when an app is being initialized. Here is the entire code from DecodingJson.elm thus far: